A thought about long rifles and warband ratings

While where in the wishlist can we have rating shied bearers an extra shield giving more health maybe with the jezzails or maybe just for more survivability.
Ref picture 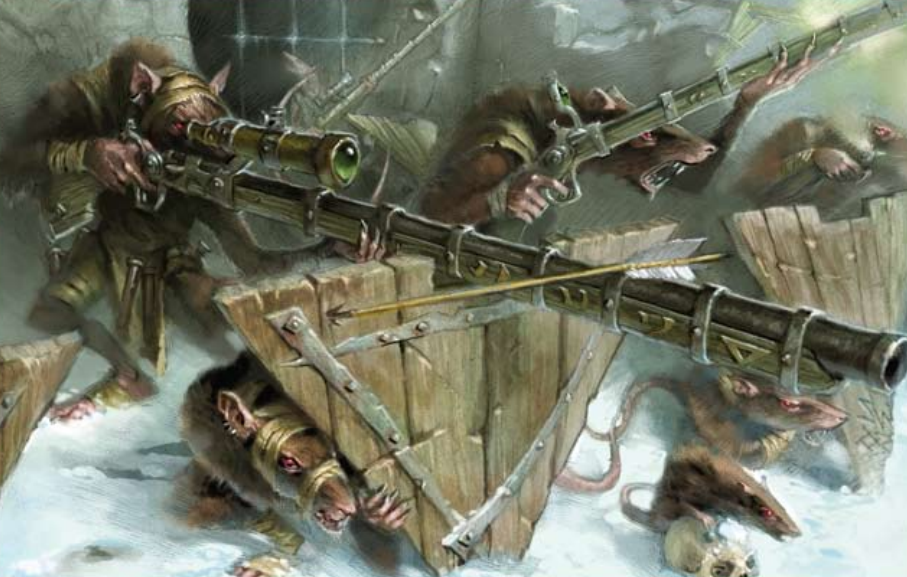 Niiiiice, great picture. The Skaven definetly need something more, against heavily armored war bands their lack of hitting power and is really felt!

I never liked teh shield bearers as they were basically an extra model to carry the gun and only sometimes gave good protection like and extra life or +50% armor.

Actually a big oversized shield could be a useful piece of equipment. If Legendary is focusing exclusively on "skaven are cowardly" then give them a big shield to hide behind.

ALthough this is getting more and more off topic. How many comments here have anything to do with Warband Rating or placement? Yes I would like to place my characters. Its very irritating when I have to spend several turns picking up my characters out of weird places to unite the group, especially if its in a bad position like an open field without cover.

I gave up keeping people on topic, but to return to it.

Most of my games they're clumped together, when they aren't I do like you wish I didn't have to spend a few turns uniting them.

On a side note it be cool if skaven actually deployed in cover it is thematic and what I usually use the first move doing just getting all my guys stealth.

I have found that Skaven are best when they fight together like a horde of rats... and can get slaughtered if fighting separately.

I experimented with using a lone Ninja Skaven (who had mastered throwing stars and who had the ambush skill) to run around the map by himself, it was my intention that he would attack unwary bow men and silently rule the table. In reality the throwing stars have such a small range that the margin for error to use them and remain hidden is very very small. Every time I attempted this tactic m guy was found out and killed by the enemy.

Normally an enemy bowmen I was stalking would unexpectedly run near my hiding area and spot me. I would immediately start hitting him with throwing stars but would miss with one of my three shots, the bowmen would then hit me twice with his bow at very close range and that would be the end of Mr. Sneaky ninja.

If the Skaven had a skill that enabled them to DOUBLE the range of their throwing stars that would be EXTREMELY helpful.

Anyway regarding Jezzails and shields that sounds like an idea for a new thread...
M

Can we gather all our ideas how to fix skaven and what's wrong with them in one thread? This way they may start to take it seriously.

Sadly there is so much wrong with the Skaven that might putting all the ideas together into one thread may take a while... also Legendary is not paying us to make to make their game better. All these suggestions we are giving should have been incorporated into the Skaven from the beginning.

I have seen so many bugs and poorly thought our ideas with the Skaven that I am beginning to doubt if they even playtested the Skaven at all.

What is really depressing is if you look at past threads the number of Moderator comments has dropped off significantly since the Skaven were released. I can only hope that means they are just sitting back and taking notes and just waiting to see what all the suggestions are before jumping into the ring.

If Legendary wants to have a fantastic game, it is their job to collect all these threads and ideas and present them to the developers. However, one thing to keep in mind...

It has only been a few days since they released Skaven and rewriting code takes time and A LOT of time effort. The game that we currently have exists because the developers planned it that way which means they were okay with having us pay for us a bare bones Skaven warband that lacked any real punch, was missing special characters, and was not truly competitive.

Yes I believe they will fix the warband eventually but that may take weeks...

Personally I hope that Legendary figures it out, Mordheim Warband Skirmish has the makings of a fantastic game, there is so much they got right. Unfortunately they just nickle and dimed the Skaven and the results are not what they should have been. I realized that I have personally spent wayyyy to much time and money on this game and I need to step back so I will see everyone in a while.

I'm very curious how playtesting looks. When fighting up to 20 games versus starting warbands skaven indeed do fine - stats and weapons are not as much important, enemy initiative is low and fear is almost no existent while movement gives skaven a serious advantage. Later however...

I really hope they will listen to us, because apparently I'm not a right person to point out bugs and broken stuff - even though I created quite a few threads, made videos to show what's wrong I have a feeling my comments and feedback is not welcomed.

I still have hopes for this game - I fell in love with Mordheim since I discovered it 15years ago and this game "feels" very Mordheimy. Even more than City of the Damned. I don't want it to walk the same path to damnation as other warhammer games (DoW and Total War being an exception mayby), both on mobile and PC just because mods choose not to listen to community and go their own "better" way. I spent quite a few $ on this game and I'm willing to spend more IF the product is good. If it is not... Well.

And yes - you have a point. They're not paying us, we use our precious free time to tell what would mke this game better. In my first skven thread my concerns (proved to be right) were bashed and I was told that my post lack "constructive feedback". Well here we are.
You must log in or register to reply here.
Share:
Facebook Twitter Reddit Pinterest Tumblr WhatsApp Email Link
Top